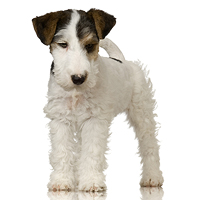 The Fox Terrier - Wire At a Glance

Recognized By
AKC
Country of Origin
Great Britain
Life Expectancy
12 - 14 yrs
Height Range
15 - 16 in
Weight Range
16 - 20 lbs
Colors
White with tan and black markings
Trainability
Good, but likes a challenge. May become bored with repetition. Requires patience and a sense of humor
With Children
Good; very playful. May be too active for toddlers/small children
With Animals
Can be dominant with other dogs. Usually does best with opposite sex. May chase cats/other small animals
Climate
Tolerates heat and cold fairly well, but is an inside dogs. Clipped dogs may need coat in very cold
Indoor/Outdoor
Loves to play and run outside but needs to live inside. Needs leash/fenced yard and supervision outside
Exercise Reqd
Adapts equally well to city, country, suburbs, but needs chance to run and play. Requires leash or fenced yard.
Grooming Reqd
Regular brushing; hand stripping every 6 months 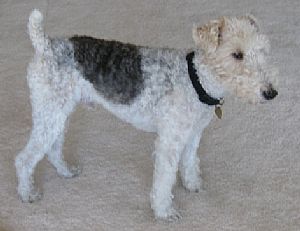 The Wire Fox Terrier originated in England and is known for its handsome appearance and happy nature. Its size is ideal. At about 15 ˝ inches tall at the shoulders, the Wire is a perfect size to tuck under an arm and easy to take almost anywhere! The smaller ones can even fit in a “Sherpa” bag and ride under the seat on a commercial airline. Living with a Wire Fox Terrier requires a sense of humor; He is active and funny but also loyal and affectionate. .

This spirited little terrier is known for his alert, “ready-for anything” outlook on life. The standard describes him as being “on the tip toe of expectation,” but he is not “hyper” or high-strung. He is generally good with well behaved children, although he may be too active for some. He loves to play and can amuse himself. The Wire is devoted to his owner and will pop up to follow his “person” from one room to another, just to be sure he isn’t missing out on anything! His tail is always wagging and he joyfully greets his owner, even if he has seen him only a few minutes earlier. At the end of the day, however, the Wire is content to curl up on a lap and be petted..

Originally the Wire was bred in England to hunt rodents, rabbits and fox. He did not run with the hounds but would be tucked in the “Terrier Man’s” saddlebag on fox hunts.. When the fox went to “earth”, the courageous little dog would be dropped to the ground to follow the fox down the hole. His job was not to attack the fox, but to corner him and bark until the huntsman came to dig the fox out. Always tenacious, he was an excellent hunter. Today’s Wire still likes to dig and will do his best to keep your yard free of mice, rabbits and more. However, he does best in a fenced yard or on a lead as he is eager to run off to follow any adventure. Everything interests him, from a leaf blowing in the wind to a child playing ball. .He loves a good run but can adapt well to city life and long walks on a lead.

Wire Fox Terriers don’t seem to know that they are small dogs. They will not back down from a challenge from even a much larger dog and often get along best with a companion dog of the opposite sex. Wires do have a strong chase instinct. Many can live with cats if they are introduced to them as puppies, but rarely would one be able to resist chasing a cat otherwise. How well the dog will get along with other animals can depend on his owner. The Wire’s owner needs to set limits right from the beginning and not be swayed by how cute the puppy is. Terriers have a reputation for stubbornness and will take advantage of a situation if they don’t think their owner is in charge. In spite of that, they are quite trainable but respond best to positive training. Because they can get bored easily, they usually prefer a training challenge, often performing the more difficult task better than the easier, repetitive one.

Most Wire Fox Terriers are predominately white with black and tan markings, although some are white and tan (called Gingers) and a few may be all white. They are known for their hard Wire coat which does not shed, making them a dog that can often be tolerated by an owner usually allergic to dogs. The top coat is dense and has the Wire texture. The undercoat has softer, shorter hair. To keep the coat’s wiry texture and brilliant color, it must be “plucked” or “stripped” every 6-12 weeks, pulling out the undercoat and keeping the Wire topcoat short and hard. All Wires being shown are stripped, but pets are often clippered. Clipping does result in a softer coat with faded coloring so some pet owners, strip out just the colored parts of the coat and clipper the white to keep the black and tan brighter. A good groomer can clipper your pet to make him look neat and handsome. However, you may want to take along a picture of a nicely trimmed Wire to be used as a guide. Since Wires are not commonly seen in some areas, your little Wire might come back from the shop looking more like a Schnauzer!

Trimming or stripping for show is an art and best learned at the hand of an experienced mentor. A reputable breeder can provide the help that a novice show owner will need, but learning to prepare a Wire for the show ring will take patience and experience. If you are not an experienced trimmer, it can be expensive to have the dog stripped by a professional.

In addition to conformation showing, Wire Fox Terriers compete in agility, fly ball, obedience, agility , earth dog trials, tracking and earn Canine Good Citizen certificates. Wire Fox Terriers also make excellent therapy dogs due to their size, willingness to befriend everyone they meet and an uncommon gentleness with those who are ill, old or fragile.

The standard calls for a flat skull and a narrow head. The jaws should be strong and muscular with a complete scissor bite. The eyes should be small, round, dark and deep set. The ears are V shaped and drop forward close to the cheeks. The neck is muscular and of a good length. The chest should be deep but not too broad, the shoulders long and sloping. The complete standard can be found at http://www.aftc.org

Wires are generally considered to be healthy and hardy. At this time, neither the American Fox Terrier Club or the Fox Terrier Club of the UK has any recommended genetic or hereditary testing recommended for the breed. While most references list the Wire Fox Terrier life span as 12-14 years, it is not unusual for them to live longer. Unfortunately, Wires have recently become popular with puppy mills, pet shops and some back yard breeders who are not always careful or aware of health issues in the dogs they breed. Members in good standing of the American Fox Terrier Club (http://www.aftc.org )or one of the Regional Fox Terrier club must abide by a strict code of ethics and are more likely to know the health, structure and temperament in several generations of their dogs.

Our national breed club, the Fox Terrier Club of America, has a contact for rescue dogs. Please get in touch if you are interested in giving a rescue dog a good home.

The following conditions may be a concern in the Fox Terrier - Wire: