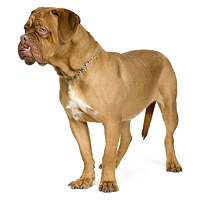 The Dogue de Bordeaux At a Glance

My Dogue is the best doggie I ever had... he is pure LOVE in the form of slobbers and stinky toots... check out his blog at www.cagedoguedebordeaux.wordpress.com
- Posted by Zena from Indiana USA
Post Your Dogue de Bordeaux Comment

Breed Standard
HEAD: In the male, the perimeter of the skull measured the level of its greatest width corresponds to the height at the withers. In females, it may be slightly les. Its volume and shape are the consequences of the very important development of the temporal, supraorbital ridges, zygomatic arches, and the spacing of the branches of the lower jaw. The upper region of the skull is slightly convex from side to side. Frontal nasal depression of the stop is very pronounced, almost at a right angle to the muzzle. The frontal groove deep, diminishing toward the back of the head. The forehead dominates the face, yet is still wider than high.
MUZZLE: Powerful, broad, thick, rather than short, upper line very slightly concave, moderately obvious folds. Its width hardly decreases toward the end of the muzzle. When seen from above it has the shape of a square.
NOSE: Broad, well opened nostrils, well pigmented black or brown according to mask. Turned up nose not permitted.
MOUTH: Jaws are very powerful and broad. Undershot bite. Lower jaw must project 0.2-0.8 in. The incisors and canines must not be visible when the mouth is closed. The teeth are very strong; strong canines; lower canines set wide apart and slightly curved.
EYES: Oval an set wide apart. The space between the two inner angles of the eyelids equals about twice the length of the eye. Frank expression. Hazel to dark brown for a dog with a black mask; lighter color tolerated but not desireable in subjects with a red mask.
EARS: Relatively small, of a slightly darker color than the coat. At its set on, the ear base is slightly raised in front but must fall back, without limpness along the cheeks. The tip is slightly rounded and must not reach much beyond the eye.
NECK: Very strong, muscular, almost cylindrical. Enormous neck with ample skin, loose and supple. Average circumference equals almost that of the head. The dewlap, well defined, starts at the level of the throat and forms folds to the chest.
COAT: Fine hair which is short nd soft to the touch.
COLOR: Reddish brown, the color of mahogany or in the range of the fawn shades. Good pigmentation is desireable. Small white patches on the chest and feet are allowed.
TAIL: Very thick at the base. The tip does not reach below the hock. Carried low, deeply set. Hanging when at rest, generally raised from 90-120 degrees in realtion to the vertical position when the dog is active.
FOREQUARTERS: Strong bone structre, legs very muscular. Elbows neither turned in or out too much. Forearm is straight or slightly inclined inwrd in order to get closer to the medium plane, especially with very broad chests. Pasterns are powerful, slightly sloping, sometimes a little turned. Feet are strong and tight. Nails curved, preferably pigmented. Pads well developed and supple.
BODY: Chest is powerful, well ribbed up, broad, let down deeper than the elbows. Powerful forechest. Sternal ribs rounded. Other ribs well sprung and well let down. The circumference of the chest must be 10-12 inches superior to the height at the withers.
HINDQUARTERS: Thighs are well developed and thick, muscles visible. STifle in parallel plane to the vertical median plane or slightly turned inward or outward. Lower thigh is relatively short, muscular and well let down. Hock is short and sinewy with the angle of the hock relatively open. When viewed from the rear, the parallel hind legs give the impression of power, although the hindquarters are slightly less broad than the forequarters.
SIZE: Between 100-110 lbs at least. Females lighter than dogs. Males 60-68 cms in height at the withers; females 58-66 cms at the withers. Size should be in proportion to the size of the head.